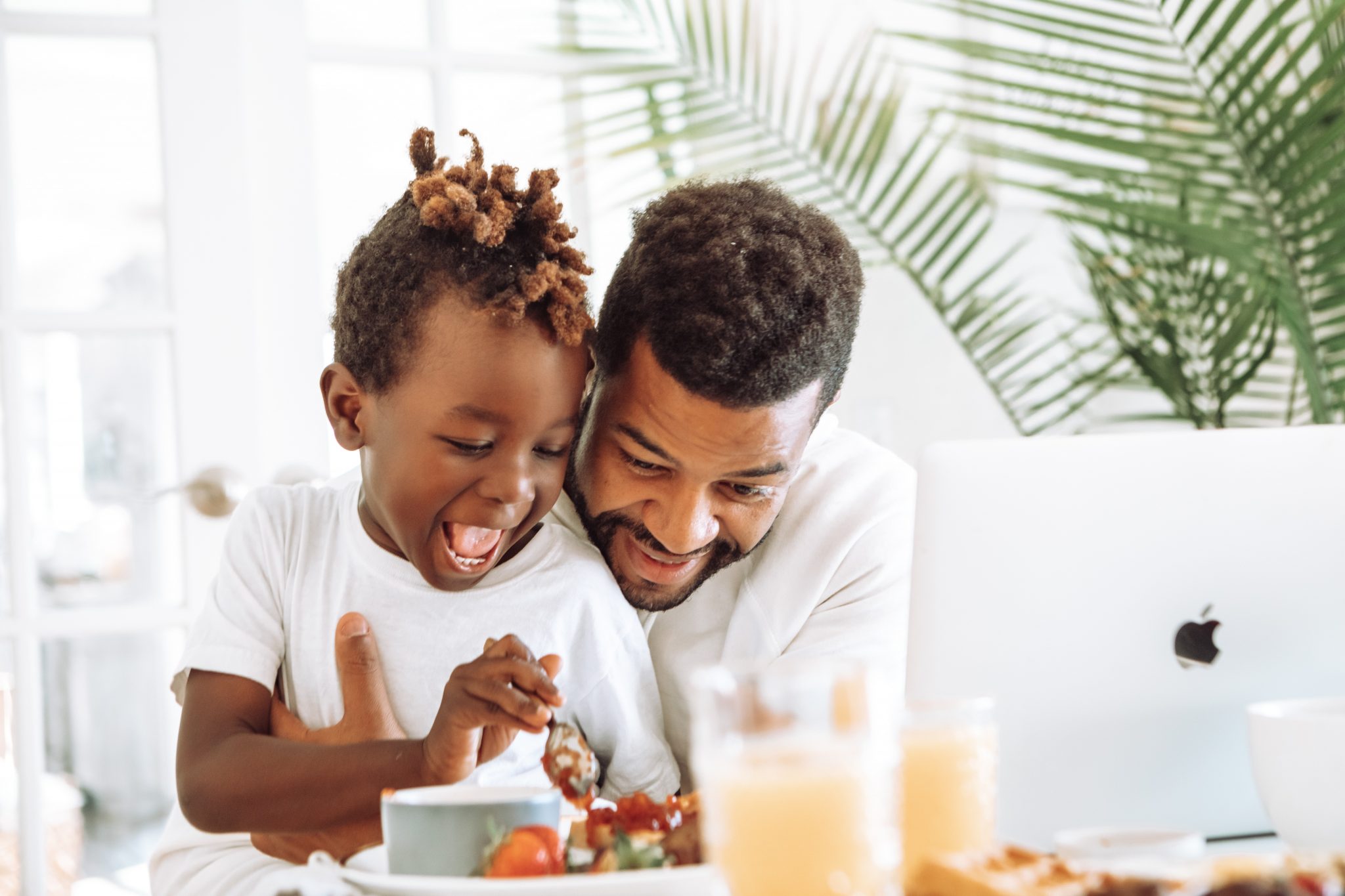 Christina Woods, M.Ed. (she/her) is an anti-racist and anti-bias educator and consultant, and the founder of the future perfect ,a professional development program that harnesses the power of the collective to create purposeful learning experiences, practicum, and reflection. Christina is a multiracial woman with hearing loss. When she had children of her own seven years ago, she experienced a shift in her thinking about racial identity development and ability. Curiosity about her children’s experience, and it’s diversion from her own, led to study, reflection, and an eventual focus on antiracism in the classroom as a means towards self-acceptance, mutual understanding, and belonging.

“What are you?” I’ve been asked to self-identify in this way for as long as I can remember. Memory is a tricky thing, but I have a hazy flashback of being asked this very question while I was still in a stroller. In the late 80s, I was one of a few biracial children in my community.

Today, one in seven babies that are born are multiracial; when I was a born, the number was closer to one in twenty. While it is clear that ideas about race are evolving, the desire to classify people into racial groups remains a dominant marker of American society. It is a harmful truth that racial ambiguity is disarming to people in a culture obsessed with classification and hierarchy.

The question “What are you,” is an aggression that otherizes. It is painful and commonplace. It was asked directly of me, frequently, as a child and young adult. I’m encouraged to divulge my racial identity in more nuanced ways today, but the question remains. For example, recently I sent my bio to a colleague in antiracism work in anticipation of an upcoming workshop we were to facilitate together. In it, I identify myself as Black biracial. Rather than accommodate the reality of my two, complete, racial identities, I was asked to change my bio to be more palatable to others. Needless to say, the questioning continues. It has been a guiding force in my life, and for a long time, it was a source of profound resentment.

My Racial Identity and Parenting

Then, I had children of my own. My first two were born within 16 months of one another, with skin that’s not quite like mine, hair that isn’t quite like mine, and eyes in shades reflective of my family, but not quite like mine. As the melding of our families and cultures became more complete in the creation of our family, I recognized within myself a dissonance between my racial identity and the life I was living. The question that followed me for so long dug deep into my own psyche, and became one that I was inadvertently asking of my children.

As I found myself revisiting that question for myself and my children, I was no longer using the derogatory word “what,” but I was still pushing in the direction of categorization and classification, and truly wondering why. I’d resisted labels for my whole life, and here I was, not only seeking one for myself, but also projecting that desire onto my children. I was looking at race as a thing, as an endpoint or a destination, rather than as an action, something that exists based on how we live, and what we nurture.

It was in motherhood that I realized for the first time that I was still deep in the process of my own racial identity development. That this loathe question was not always borne of ill will, but of fears I still hold myself. About my children, I wondered, will they belong? Will they reject me? Will they know where they come from?

All racial identity development is an ongoing process that is not necessarily linear. Racial identity development is not a destination. It is affected by myriad things: physical appearance, family relationships, and experiences with different racial groups. Some multiracial people identify publicly as one race, and another with family and friends.

We know that for people of color in the United States, race is an early awareness, while for white people, it can take until adulthood to come into “contact” with racism, and thus self-examination with regards to race. That’s not to say that white children are not grappling with race from birth, because they are. However, they often lack a language or framework for understanding race.

For white people who do not develop a healthy racial identity, the stakes are actually quite high and they can be realized in an inability to engage authentically in diverse environments, struggles in fostering cross-racial relationships, an internalization of superiority, and even a need to distance themselves from whiteness.

These things can and often do happen despite a deep desire for authenticity, in the chosen context of diverse environments, and in the midst of cross-racial relationships that are cherished. Without an understanding of their own whiteness, and how it plays out in their lives, white people are poised for loss.

Conversely, people of color who struggle to develop a healthy racial identity  can end up internalizing negative racial experiences, losing their sense of agency, and succumbing to structural and psychological limitations imposed by racism.

Developing a strong sense of self and an innate sense of belonging is not a panacea to racism. I am not suggesting that people of color can combat white supremacy by doing internal work, or that we should. However, I am suggesting that healthy racial identity can serve as a balm and safe haven in the midst of oppression.

Although originally imagined for children, Louise Derman-Sparks’ four goals of anti-bias education are universal and capture the essence of healthy racial identity development. Succinctly, they consist of the love of self, the love and celebration of human diversity, the ability to recognize injustice, and the ability to have agency in the face of that injustice. The ultimate end goal to this process is the nurturing of anti-racist ideas, and advocacy for anti-racist policies. When we have positive racial identity development that is ongoing, we can get closer and closer to achieving an innate sense of belonging, authentic relationships, and racial equality.

Developing your racial identity can start with just thinking about it. Reflections on your early experiences with race, the teachings of your family of origin, and the worlds you currently engage can lead you towards self-realization. How do you show up in the world, and why is it that way? How is that reflective of who you want to be, and where is it a hindrance to your growth? Sit with the feelings that reflections on race bring up; whether they are joyous, angry, or confusing; they are guides towards uncovering how you do race.

Do Your Own Work (ongoing self-examination)

Dr. Ibram X. Kendi, describes racism as to metastatic cancer, where the treatment is localized removal of the tumor. “Racial inequalities are pervasive and persistent in every sector of society,” he said. “If a person does nothing in the face of racial inequities that are pervasive, if they don’t challenge them, what are they doing?” When we do our own work, we are finding the ways that we contribute to white supremacy, and the spaces and places where we have agency. Then, in relationship with people of color at the center, we work on removal of the inequity. Then, we do it again.

Years later, as my children enter elementary school, I have some pretty good answers to my questions about how my children will racially identify. I know today that how they identify will evolve.  At different times of their lives, they may embrace or reject Blackness, and that is not a reflection of me or Blackness, but rather the stronghold of white supremacy they live under.

They will know where they come from if I show them, but they are not bound by the past. I’ve learned that racial identity development is a lifelong process of peeling away layers through reflection, development of critical consciousness, and ongoing self-examination, so I then must relinquish the idea that it is my role as mother to script a perfect scenario for them, but rather to model that the ultimate goal is not a particular identity, but rather a love of self and others, and a rejection of injustice.

Teachers want and need the skills and tools to guide racial identity development in the classroom, too. At my organization, the future perfect, we work with educators through a community-based process of information gathering, professional practice, and reflection toward that brave and grace-filled ideal. We know what we want for “our kids,” and we also know that all kids are our kids. The future, as we move to make it more perfect, depends on our work today. This spring, we pilot our first anti-bias anti-racist teacher cohort. If you’re an educator, we’d love to have you join us.

More About the Author

Christina knows that teacher development is most effective when it combines information with application. Christina’s professional areas of interest include the relational aspects of anti-bias and anti-racist education, the power of community support, mentorship, coalition building, and accountability.

As an educator, Christina both creates and curates curricula and pedagogical supports. She has experience teaching in grades K-12, as well as in post-secondary as a professor of education serving secondary teaching candidates. As a consultant, Christina has worked with parent organizations, schools, faith communities, and corporations as they progress on the continuum toward anti-racism. Christina has served on the board of her neighborhood cooperative preschool as the Chair of Diversity, Anti-Oppression and Belonging, as an elected member of a local public school council, and is currently a member of the racial equity parents group at her children’s school.

The impact she seeks through working with teachers at the future perfect is in children’s daily lived experiences. Christina loves to cook. During the pandemic, she’s become obsessed with themed family events (think puzzle night, board game night, and a baby’s first food Zoom party). Like many teachers, she loves a good planner and plans on using the ones she’s collected to actually plan something one day.

How to Build Healthy Dating Relationships